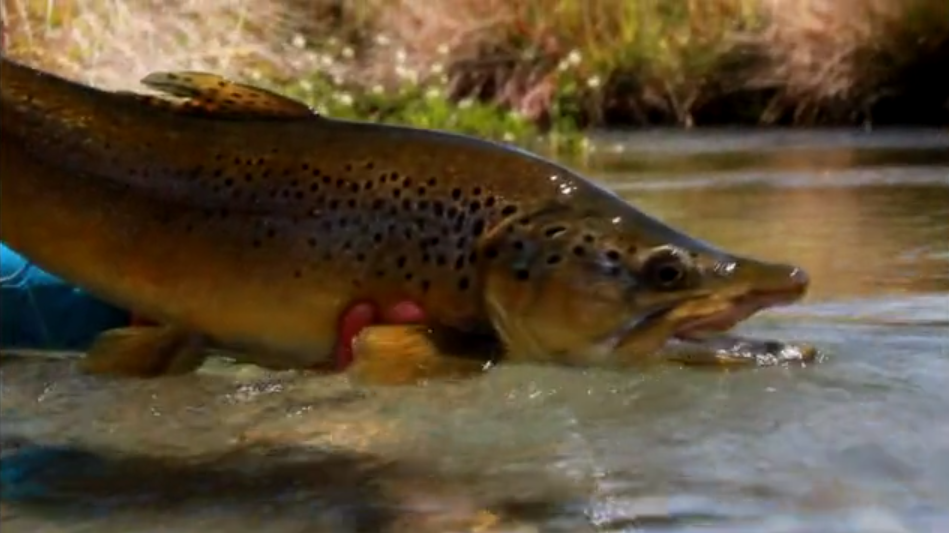 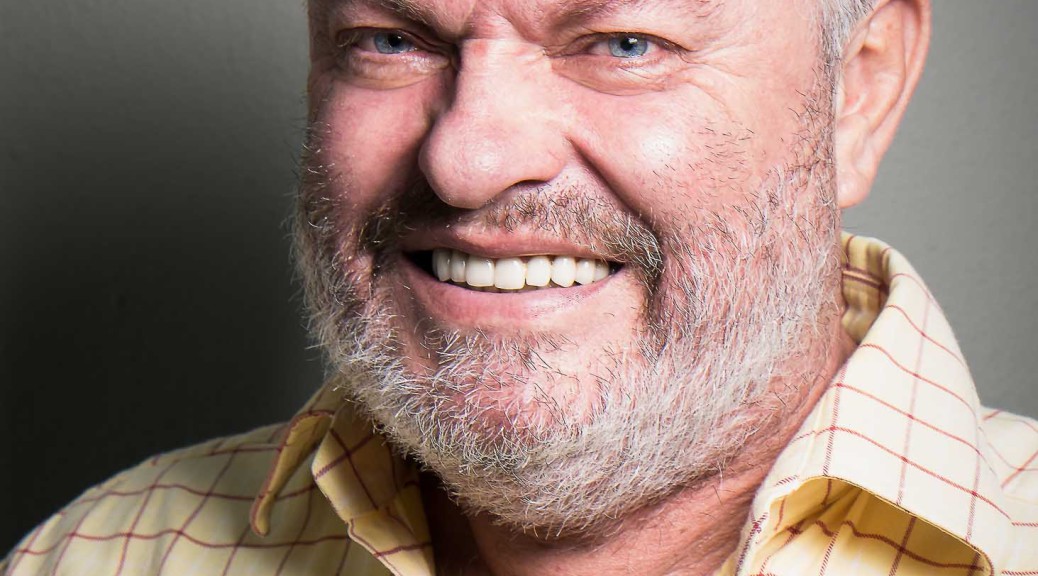 Chris Williams was elected as the new chairman of the Northvaal Chapter of FOSAF at the recent AGM of the Chapter. He takes over from Peter Mills who stood down earlier in the year.

Chris was born in England and as a youngster fished for many of the UK’s freshwater species. His family later moved to South Africa where he attended St Stithians College and later graduated at Wits University. He then lived for 7 years in Australia where he fished for both fresh and saltwater species.

On returning to South Africa he became chairman of his old school’s very successful Stithians Flyfishers Club which in addition to the scholars is now open to the public. The club organises monthly outings to either trout destinations or yellowfish venues on the Vaal and its tributaries. It also does a considerable amount education and conservation work. He also appears from time to time on Classic FM flyfishing shows.

Chris is married to Bernadette and they have two children who are also graduates of Wits. He lives in Johannesburg where he runs a shipping business and is also the ambassador for the Citadel Conservation Trust. Some of his spare time is spent on the family’s property near Badplaas where the Seekoeispruit, a tributary of the Komati, provides good light tackle sport for small and largescale yellows. 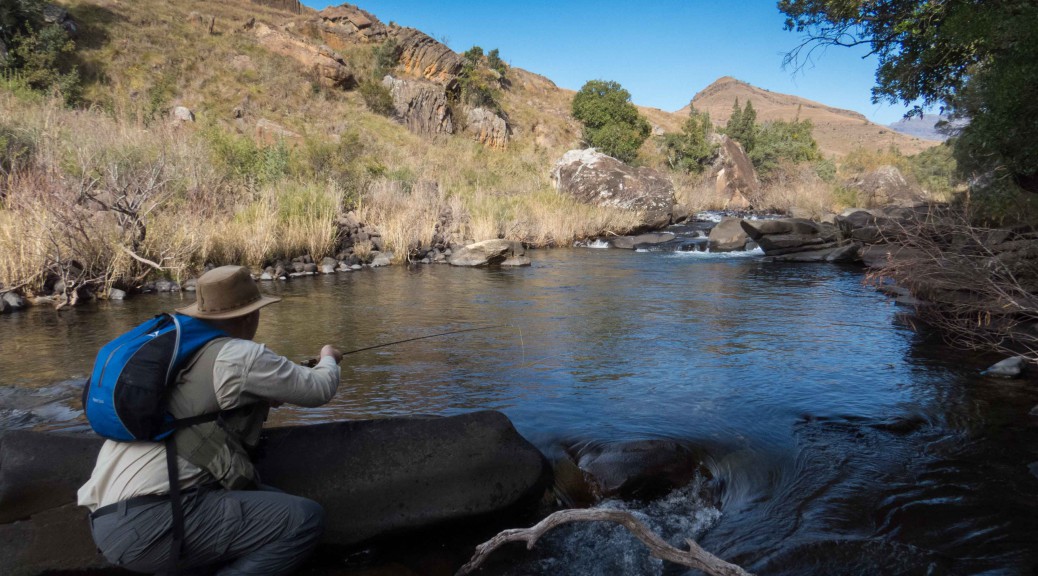 The river fishing petered out at the end of the season. As the hills got browner, the browns got scarcer. I guess that is what happens at the end of the season. It is however a little surprising, because it has been remarkably warm. I measured water temperatures on the Bushman’s of 16 degrees C after lunch a week or two back!
We were fishing a stretch that I usually drive past. It was great water to explore, and I have put a mental marker on that piece for next season, but the fishing was downright slow. In one pool we had some action (i.e. we failed!) and that was it!
As far as rivers go, someone must have shot their mouth off about the Umgeni, because a whole bunch of people fished this particular river at the end of the season. It produced some nice fish too. At least one of them went to two pounds! I hope you all have short memories and that when the season re-opens in September you will leave me in peace there! 

The Natal Fly Fishers Club results for the month of May showed an average of some 2.2 trout per 5 hrs of fishing, well up on the 1.8 or so from the preceding, hotter months. It is interesting though, how members all flock to the same waters. I guess they see or hear that they are being fished, see fish being caught, and go there in the hopes of experiencing the same.
Some of the more adventurous guys head out to all the waters, and give them a bash. I applaud that more adventurous spirit. My friend Anton did that last year. I forget if it was this season or last, but either way, he went off to a far flung dam that the club members have all but forgotten about, and guess what: he had an absolute field day. (No: I am not telling where!) I forget how many he and his fishing buddy got. Seven or seventeen. Something like that.
Either way, it was a cracker of a day. Whether it is a club water or a private or public one, I would suggest you go and give the less popular ones a go. What you sometimes find, is Trout as innocent as a mermaid, but a lot easier to catch. OK, so statistically this isn’t saying much, but I think you get the drift.

At those waters, at this time of the year, I would be prowling the banks, taking your time to get through the bankside vegetation as quietly as you can, and placing a few well-placed casts just as you would on a stream. On a stream we tend to creep into position, and cast carefully and deliberately. I don’t know why, but on a stillwater, we suddenly transform into “chuck and chance it” guys. Try fishing the stillwater as you would a stream.
Peter Brigg did an interview with Roxanne Stegen in the latest flyfishing mag, and that bankside approach came through strongly. Roxanne catches fish (Did you see the pictures in my last report?). Take from that what you will, but I say leave the tube in the shade of a tree for a while and go throw a delicate fly in the margins before you go nautical.
What fly would that be on a stillwater at this time of year? I don’t know. I cant decide. Egg patterns will surely start being important in June. Big fierce Mienkies and woolly buggers too. But I am finding that picture difficult to conjure up in my mind, because the weather has been so warm of late.

They tell me a big cold front is coming at the end of this week. I am looking forward to that. I have stocked up on firewood, bought a thicker fleece, and cleaned the canoe. It’s time for KZN’s winter trout season on stillwaters. I can’t wait.

Report from Tourette Fishing.
Pierre Swartz,Tourette fishing guide at the Makhangoa Community Camp (MCC) reports:Winter is well under way and the fishing at the MCC has been nothing short of spectacular this month. Large schools of big rainbow trout have been making their way into the Bokong River and its confluence with the Katse dam below camp. It has been a record breaking season with more than a dozen fish over 10lbs landed. Many of the camp guests achieve their personal best catches, whilst a few have been treated to fish that are quite clearly one of a lifetime. Tony landed a monstrous 15lb fish, and this past weekend Michael and Gerhard from JHB each landed fish of 12lbs. Soon after Michael bought in his trout of 12lb to the net, he landed what we think may well have been an unofficial all African record, which we conservatively put at 9 – 9.5kg’s (20lb or more). There have also been a few brown trout up to 3lbs coming to hand, as well as the odd yellowfish still feeding deep. The Makhangoa Community Camp continues to provide world class fishing and we look forward to seeing how the season progresses as we break new ground on a daily basis keeping the camp open for winter.
Please make sure you book with Tourette before visiting this destination.

Winter fishing in the trophy highland waters of the Winterberg, Stormberg and Somerset East promises to be great this year. Just make sure you take plenty of warm clothing as it can be icy at these waters. Have a look at http://www.fosaf.co.za/report-winterberg-stormberg.php. for the latest reports.

YWG has been receiving feedback from Dr Aidan Wood who has been asked by SASACC (South African Sport Anglers & Casting Federation) to represent the interests of anglers on matters relating to a commercial fishery at VDK Dam. While not officially representing the YWG he has agreed to voice our views at the stakeholder’s advisory committee which has been set up to discuss and monitor the experimental and small-scale commercial fishery at VDK Dam. Some concern has been expressed by anglers including fly fishers that netting the dam commercially will negatively impact on the dam’s angling potential.  Aquatic Scientists and conservationist have, similarly, expressed concerns that this activity might be unsustainable if not properly managed.  Unfortunately very little data exists about the population dynamics and conservation status of, especially the largemouth yellowfish Labeobarbus kimberleyensis, to conclusively predict what impact a commercial fishery may have on this species.  Here in lies the problem, old and outdated information has been used by the project proposer’s that a commercial operation at VDK is possible. This, and the fact that similar operations in other parts of the country have failed has given reason to the apprehension expressed by both scientists and anglers about the project. Dr Wood has kindly forwarded us three documents which have been posted elsewhere on this website at http://www.fosaf.co.za/ywgDocuments.php. These are:

While the YWG is not opposed to the project we will by exerting pressure to ensure that correct measures are put in place to monitor the impact of this project on VDK Dam. You are welcome to share your views and to engage with us via Facebook and email on this matter. We trust these documents will provide more detailed information on this project.

Hello Everyone,
Starting in the north, JP Bartholomew has been fishing hard and having great success with Bluefin kingfish, Grunter, Stone Bream small Cob and a Concertina fish all on fly .
Peter Lehman and I fished the Vetchies pier area on Sunday morning. I managed to catch a Blue Emperor on a Rapallo lure which was just drifting along while I was fly fishing over the reef and followed that up with a beautiful Natal Rainbow Wrasse on fly and then hooked into a strong fish which bit me off. Peter caught the reef at least six times with his fast sinking line so we moved off to fish the shark nets but the only fish there were shoals of Garfish.

Marius and I fished Durban harbour the previous Saturday morning. I was once again targeting Grunter on the centre banks but only caught Sand Gurnard . Standing perfectly still the occasional grunter came within three meters of me on several occasions and it’s quite exciting casting to Grunter as they drift along with the current and blow sand up in their feeding manner. I shall just have to tie more shrimp flies and persevere. I always enjoy the harbour because there is a lot to see, with ships coming and going, other fishing and sailing boats moving around and bird life around you. I watched three pelicans following two Darters around obviously harassing them as they hunted in an attempt to steal their catch. At times they would jump right on top of them really bullying them and when the Pelicans take off they are truly graceful birds in the air. With the tide retreating and the sandbanks getting exposed hundreds of Pigeons settle on the banks feeding on whatever they can find.
Anyone wanting to fish Durban harbour from a ski can get a permit by joining Durban paddle Ski Club. You will need the usual safety equipment and have your ski inspected but with a second hand ski and basic safety X
Fishequipment it won’t break the bank.

Not much news from further south with Shad at Winkelspruit and a few Natal Snoek and Garrick coming out on live baits.
Stan Stanton and his son Mark fished the Impenjati River again, both of them catching some nice fish. Stan landing a 41cm Rock Salmon and a 35cm Kingfish .
Peter Lehman spent a few days at Giants Cup in the southern Drakensberg and caught a number of rainbow trout up to about 1,5kgs
Finally last Saturday some of the guys from our group “Fly Flickers Anonymous” fished the Umkomaas River at Mapstones farm with Craig “the Troll” Gartrell catching the biggest Yellow of about 45cm.
That’s it until next time.
Cheers
Roger

This event will be held at the Champagne Sports Resort near Winterton on Sunday 28th June, the day before the start of the SASAqS Conference. All welcome, especially anglers, guides and landowners. Cost only R340,00 per person which includes lunch, teas, registration etc. Please contact Peter at mwardern@mweb.co.za.